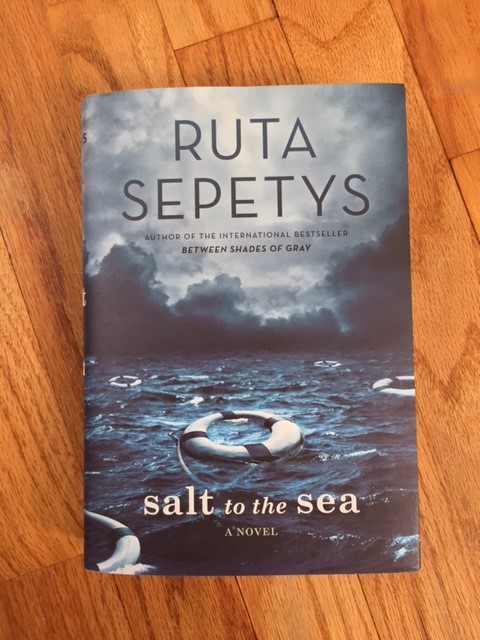 Salt to the Sea by Ruta Sepeteys

“Salt to the Sea” tells the story of 4 teenagers during the winter of 1945; Emila, Florian, Joana and Alfred. Each individual is from a different homeland and they are each struggling with their own secrets and tragedies. They all end up converging together on a journey to Gotenhafen, on the coast of what was then East Prussia in an attempt to flee from the advancing Soviets, along with thousands of other refugees, boarding a ship called the Wilhelm Gustloff, that was going to carry them to safety and freedom.

Emilia is a 15 year old girl from Poland, who had been sent West by her father in 1941. When we meet her she is hiding in a cellar in the forest. Florian, a German boy around the age of 19, meets Emilia in the cellar, where he saves her from a Russian solider. Florian is in injured and Emilia is struggling for other reasons, but follows Florian through the forest as she looks to him as a knight or savior. The meet Joana when they enter a barn, seeking refuge from the winter storm around them. Joana is slightly older, I don’t think we are told her age, but we know she is older than Florian by a few years so I estimate about 23. Joana is Lithuanian , but had repatriated to Germany, as her mother’s family was German. She had been working in a hospital as a physician’s assistant for the last 4 years in East Prussia. They have others traveling with them, such as Klaus, who they refer to as the wandering boy, who is about 6 years old and a shoe maker who they refer to as the Poet. At one point, Florian tries to leave in the middle of the night, but Emilia follows him and at the end of the day, they end up back with the group an decide to continue to travel together to Gotenhafen. They face horrible conditions and a multitude of obstacles as they make their journey to the coast. Alfred, a young German solider in the German Navy, we do not really meet until the group arrives in Gotenhafen. However, we do hear from in letters than he is writing describing the conditions there and the ships, such as the one he is on, the Wilhelm Gustloff.

The book is written from four different perspectives and the chapters are only 2 pages long at most. When I first started this book, I thought, well this is going to get complicated, but it doesn’t. I did have to flip back and look at the name at the beginning of the chapter in the beginning to clarify, but you soon get to know each character quite well. Surprisingly, the book flows very well in this format. I really enjoyed this book, as I expected to, as I really enjoyed “Between Shades of Grey” by Ruta Sepetys. I enjoy both history and historical fiction; I like that Sepetys chooses to write her historical fiction novels both based on her own heritage and around events that are not really that well known. I was aware of what happened to the Wilhelm Gustloff, as well as many other ships around this time period, but not well. In the back of the book, Septeys also gives readers some history on the actual history of the event, which I think is also an excellent idea. Overall, I really enjoyed the book, not only were the characters well developed, but so was the story line. It is a book that is filled with a lot of emotion and a lot of very sad subjects that go along with World War II. I also really enjoyed the ending and if you have read “Between Shades of Grey”, you will realize that Septey has integrated one of the characters into this book, which I also thought was great.  If you enjoy historical fiction or any of Ruta Septeys other books, I highly recommend you read “Salt to the Sea.”