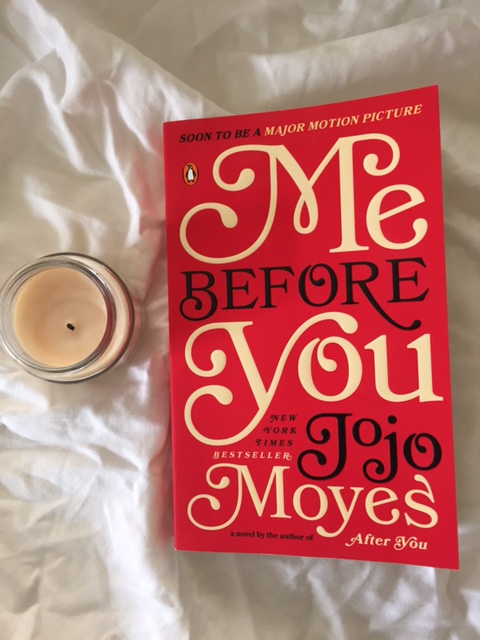 Me Before You by Jojo Moyes

Me Before You is centered around the main character of Lou Clark. Lou knows how many footsteps there are from her bus stop to her home and she knows she really enjoys her job working in the Buttered Bun cafe. Lou also knows that she might not really be in love with her long term boyfriend Patrick. What Lou doesn’t know is that she is about to lose her job and she likes knowing what is coming. The second character this book is centered around is Will Traynor, who after being involved in a motor cycle accident, has lost his desire to live. Will knows that everything in his life now feels out of his control and everything seems very small and joyless and he wants to put a stop to it. But when Lou comes bursting into Will’s life, neither of them will ever be the same.

Me Before You surprised me in more than a few ways. Sometimes really hyped books like this I am a bit weary of, however, I have to say that this book is most certainly worth the hype. I am not used to British writing, so that was a nice surprise, although there were a few phrases I had to look up. I really enjoyed the authors writing and I really enjoyed the characters themselves. Lou is very colorful and has her own distinctive personality and  I really enjoyed getting to know her. Although she has problems of her own and a past that haunts her at times, she seems to have a cheerful way about her, even if its forced. Will’s character is also well developed and I found him to be really funny as well. Both Will and Lou’s families are both very well developed and I could picture both of their parents and homes very well through the author’s descriptions. Patrick, Lou’s boyfriend, was probably my least favorite character, but I think that is perhaps what the author had in mind.

This is one of those books I have a hard time reviewing because there is so much I want to say, but I can’t without giving away spoilers, which I never do. This book was not what I expected and it did not end how I expected. I kept trying to guess which way the ending was going to go and I never figured it out until the last chapters. This book made me laugh, it made me smile and it made me cry. I really enjoyed it. After reading the synopsis and reviews for the sequel, After You I don’t know that I am going to read it right away. I will someday, but I am afraid it might diminish my feeling for this book. If you haven’t read this book, I highly recommend you do. And don’t you dare go see the movie first or instead of reading the book! Happy reading!